Detail-minded diners in Dallas may have noticed something peculiar lately on the bottom of some restaurant receipts: what is that extra service charge?

It’s a tactic some restaurants are using to raise a little extra cash during a prolonged coronavirus pandemic, when food prices and labor costs are skyrocketing.

Service charges are often given to kitchen workers without tipping, which in turn provides an incentive for cooks who would normally earn no more than an hourly wage. Restaurateurs can implement them as they wish – if they wish. In Dallas, there is a 3-10% service charge added to the bill, not including tip.

“We tried to hold off the pressure for as long as we could,” says Imran Sheikh, a Dallas restaurateur, of the inflated food and labor costs. He also notes that his restaurants charge an additional 3% for anyone using a credit card. It’s not a new cost, but it’s part of a bunch of costs out of his control.

His company Milkshake Concepts has implemented a 3% service charge at all of its restaurants, both dine-in and take-out. The fee might be more noticeable at a more expensive restaurant like Harper’s, where a 16-ounce boneless rib eye is $75 and the service charge can be $6 on a $200 tab. But at happy hour at Harper’s, two half-price cocktails could mean a 50-cent charge.

Similarly, some diners might not even notice the 25-cent service charge at one of Sheikh’s other restaurants, Sky Rocket Burger, where a double cheeseburger costs $8.59.

The charge is not intended to replace a tip to a server or bartender. That’s important, says Emily Williams Knight, President and CEO of the Texas Restaurant Association: Diners are always asked to tip servers 20% (which is the industry standard), or more. . 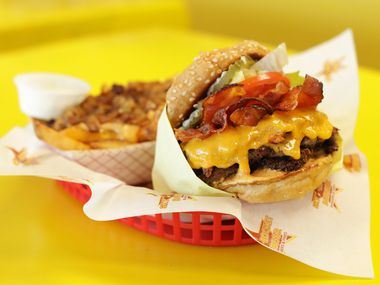 Another example of a restaurant adding 3% to take-out orders is Japanese restaurant Matsu at Plano’s Mitsuwa Marketplace.

A 3% service charge is a standard number in Texas, Knight says. But she thinks the tactic is doing more harm than good. Consumers, like restaurateurs and workers, are living through a difficult pandemic.

Knight adds that consumers want to know where their money is going, and a vague percentage at the bottom of a receipt rarely does.

She doesn’t dispute that restaurant workers deserve the extra money. She recently saw an “incredible increase” in prices for take-out packaging. And with takeout food accounting for more than 30% of U.S. food sales during the pandemic, up from 19% previously, she says restaurants are being forced to pay the difference in higher volumes of takeout packaging in more higher prices. .

Then how ? The Texas Restaurant Association tells its constituents that one of the great benefits of QR codes is that restaurants can raise their prices, and often without much care, by changing them daily on their digital menus. Knight warns restaurateurs against steep price increases, noting that consumers at all levels of the restaurant “must always see the value in the experience.”

For restaurants that charge fees, Knight says they need to be prepared to explain themselves when consumers are confused.

“You have to be upfront and transparent,” she says.

Some Dallas restaurants will also refund service charges, but customers will have to ask.

The highest service charge we’ve seen in Dallas is 10% at Oishii, a sushi restaurant with two locations in Dallas and one in Plano. For customers who buy $100 worth of sushi — then go to the restaurant to pick it up — they owe an extra $10.

Oishii’s director of operations, Bryan Dobbins, says the fee is paid to all internal staff who handle takeout orders. This is for take out orders only.

“It’s one of the many things we do to keep people qualified,” he says over email.