The mixed-use lake development is expected to feature a 6-acre surf pool and a 13-acre lake in addition to retail, restaurants and offices. (Image courtesy of Flatwater Cos.)

Chesterfield’s board of supervisors is due to meet on Wednesday. Full agenda here.

The board is expected to vote on whether to approve a proposed grant agreement for The Lake, a development of Flatwater Cos. which should include a surf pool and recreational lake. The deal would provide approximately $27-28 million in incentives to Lake Adventures LLC (an entity related to Flatwater Cos.).

Also on the agenda is a staff presentation on the proposed Genito/288 Special Interest Area Plan, a land use plan for the Southside Speedway site and adjacent areas intended to enhance operations at the River City Sportsplex of the county.

Supervisors will also review a rezoning application related to a proposed development that would include a 6,000 square foot convenience store with a restaurant and fuel pumps as well as a commercial building and mini storage facility at the intersection of Iron Bridge Road and Irongate Drive. . 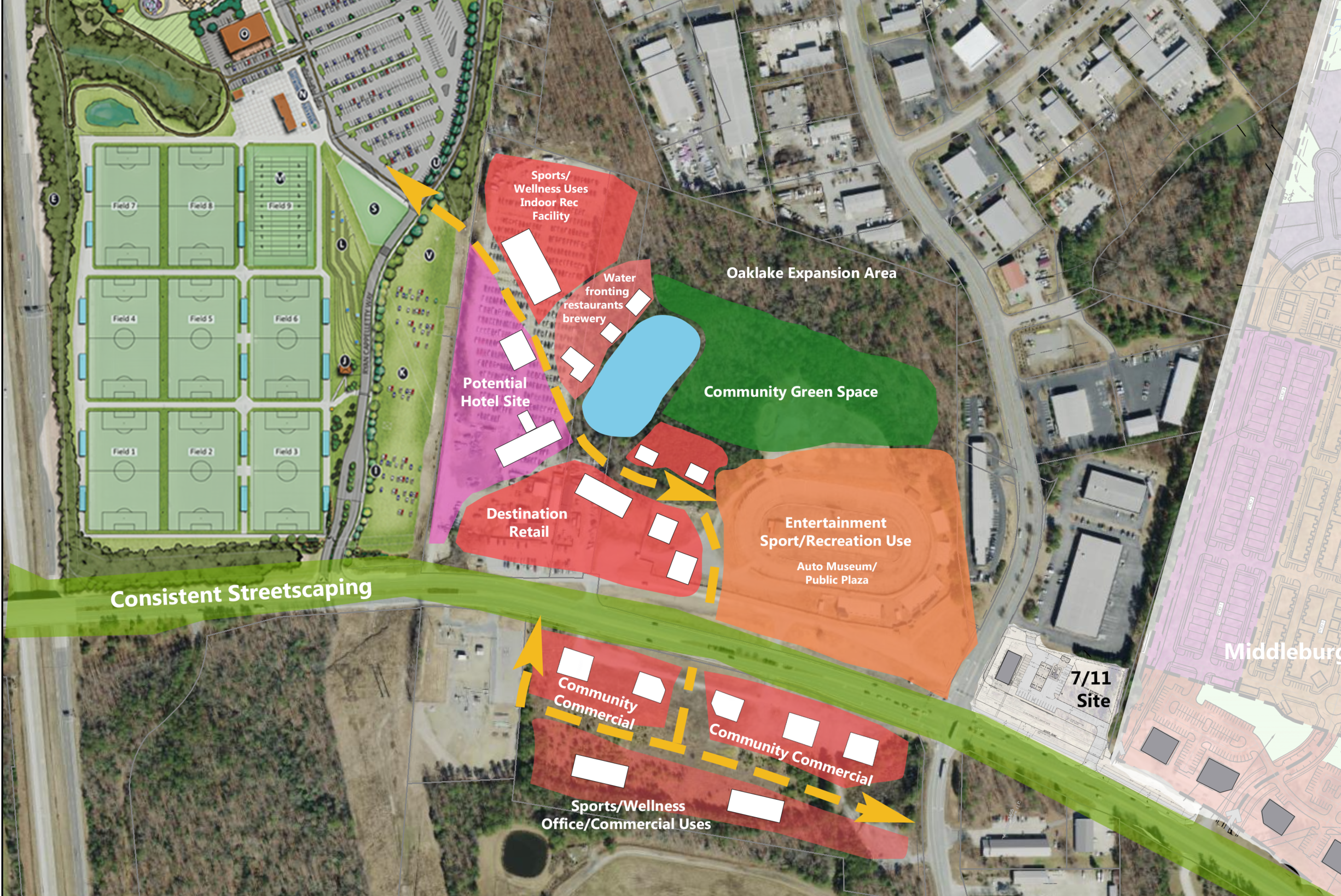 Chesterfield County released a draft vision for the development of the former Southside Speedway site as part of Genito Special Interest Area Plan/288, a proposed land use guide for the area around River City Sports Complex. (Image courtesy of Chesterfield County)

The nearly 7,700 square foot commercial building that is also part of the project on the 10-acre site could be converted into a restaurant or office, according to the staff report. The mini-storage facility would be approximately 110,000 square feet.

The assemblage that constitutes the project site consists of several plots on Iron Bridge Road and Omo Road near the Irongate Village shopping centre.

The Planning Commission recently voted to recommend approval of the application.

WEDG Acquisitions LLC wants to build a three-unit commercial strip across from Bon Secours Memorial Regional Medical Center. The 6,200 square foot retail strip to be built at 8257 Meadowbridge Road would include a Dunkin’ restaurant, according to a staff report.

The Supervisory Board will consider final approval at a future meeting.

Henrico County has launched a series of briefings on its $511 million bond referendum that will appear on the ballot in the 2022 general election this fall.

Last week’s meeting took place at the Eastern Henrico Recreation Center. Additional meetings are scheduled from 6 to 8 p.m. on September 6 and October 4 at the Western Government Center on East Parham Road.

The referendum will appear as four questions on the ballot, with a separate question for each project category: schools, recreation and parks. fire stations and public safety facilities, and storm water drainage.

The Petersburg Police Bureau opened a substation inside the Market Street Lofts apartments in conjunction with Thalhimer Realty Partners, which owns and rehabilitated the 106-unit building. The building and substation are located at 201 Hinton St.

TRP opened Market Street Lofts in January. The building is made up of studios and includes communal facilities.

The release included a quote from TRP Director Drew Wiltshire, who said the initiative “is consistent with our goals of maintaining a high-end living experience for our residents and connecting with the community.”